Tyler James is a singer/songwriter who was a runner up on BBC1’s The Voice. He met Amy Winehouse when he was thirteen at the Sylvia Young Theatre School and they remained best friends until her death in 2011.

My Amy is an evocative portrait of unbreakable lifelong friendship – and a devastating study into fame, addiction and self-sabotage.

Tyler James is the only person who knows what really happened to Amy.  He was by her side from their carefree early years touring together to the creation of the multiple Grammy-winning Back To Black, which she wrote on their kitchen floor. From her volatile marriage to Blake Fielder-Civil through her escalating addictions, self-harm and eating disorders as the toxic nature of fame warped Amy’s reality. For the last three years of her life, Tyler was with her every day when she’d beaten drugs and was close to beating alcoholism too. He also knew better than anyone the real Amy Winehouse who the tabloid-reading public rarely saw – the hilarious, uncompromising force-of-nature busy taking care of everyone else. 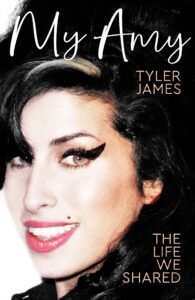 Represented at The North Literary Agency by Kevin Pocklington.